Secunderabad is popular as the twin city of Hyderabad and was founded in 1806 AD. It was actually a British cantonment with a culture and history of its own. Hyderabad was a princely state while Secunderabad developed under the rule of the British. 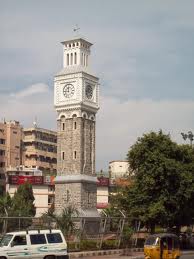 Secunderabad is marked by the obvious presence of Army and Air force, being a cantonment area. It had its own Municipality till some time back but since 1960, both Corporations have been merged to form a single Municipal Corporation.

When Nizam Asaf Jah II was forced to sign the treaty of Subsidiary Alliance in 1798 AD after he was defeated by the British. There were British troops in village Ulwul near Hussain sagar lake, who used to reside in tents in a large ground there. In 1803, the III Nizam, Nizam Sikandar Jah, named Ulwul as Secunderabad after his own name.

Secunderabad was built as a British Cantonment in 1806. Hussain Sagar lake separated Hyderabad and Secunderabad. This lake was built in the 16th century during the reign of Qutb Shahi dynasty. Secunderabad was founded towards  North of this large man made lake. Even the official language in Secunderabad during those times was English!

Other historical landmarks of Secunderabad include construction of high wall in Trimulgherry which was completed in 1867, creation of Regimental Bazaar and General Bazaar, establishment of Secunderabad Railway Station in 1874, establishment of Edward Memorial Hospital in 1851 (now popular as Gandhi Hospital) and also construction of Residency House in 1860 (now known as Rashtrapati Nilayam).

In 1687, Mughal Emperor Aurangzeb captured Golconda fort through treachery of Sarandaz Khan who was a military official in the army of Qutb Shahi dynasty.

Sir Winston Churchill was posted as subaltern in British Army during the II World War. He was the Prime Minister of U.K. then.

Secunderabad area was earlier known as Golconda and was famous for printed cloth, diamond and steel. Business and trade was carried with Europe and Asia!

The cantonment came under the aegis of Indian Armed forces after independence. Important neighbouring places are Karkhana, Sitaphalmandi, Marredpally, Ranigunj, Bhoiguda among others.

Secunderabad is growing at a fast pace in terms of infrastructural development and industrial development. Sustainable measures have to be taken by the authorities to see that a balance id created between industrial growth on one hand and conservation of nature on the other.