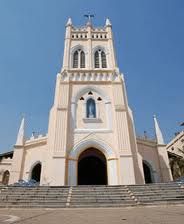 Consecrated and dedicated in 1813, this is the oldest church in Secunderabad. The British forces at Lancer’s Line came here for spiritual satisfaction. Today, many people visit thechurch for offering their prayers. 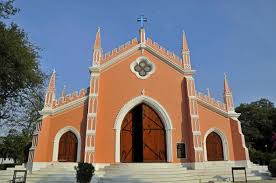 St. Mary's church is the oldest Roman Catholic church. Dedicated to Virgin Mary, it served as Cathedral of the Archdiocese of Hyderabad. The actual name of the church is Basilica of Our Lady of the Assumption but it is popularly known as St. Mary's Church.

The church looks beautiful with curved arches, pointed buttresses and many side altars dedicated to saints. It replicates the Indian Gothic style of architecture. There are four bells which were brought from Italy in the year 1901.

This church functions under the Church of South India since 1947. Previously it was actually a Garrison Church, presided by Army Chaplains. It was constructed in 1860 AD to serve the British Cantonment in Secunderabad.

The architecture resembles the Indian Gothic style, with stained glass windows that depict Jesus as carrying a cross, turrets and tower belfry. There are 16 memorial tablets along the walls of the church describing British officers who were inhabitants of Secunderabad during those days.

INTACH Heritage award was conferred on this church by Andhra Pradesh government for impeccable maintenance of the church. Years old pews and lamps with baptismal font are some antique possessions with the church.

In the year 1983, Queen Elizabeth II visited this church. She also visited the Holy Trinity Church, Bolarum situated nearby. Here, she celebrated her 36th wedding anniversary.

Holy Trinity Church is a church that functions under the auspices of the Church of South India. It was constructed in 1847 and the land was donated by Nizam of Hyderabad. It started as an Anglican church and served as spiritual place for British army officers.

The architecture is Victorian Gothic style beautified with stained glasses. Here too, there are tablets describing British Army officers. There is a cemetery adjacent to this church which comprises of graves dating from 1851.Queen Elizabeth II visited the church in 1983 and celebrated her wedding anniversary.

The Baptist church which was established in 1875 has a new centenary structure built in 1991 alongside. However, worship services in Telugu, English, Hindi and Manipuri are observed in the new centenary structure. Established in 1875 by Rev. W.W. Campbell, a Baptist missionary, there are 35 branches of this church operating at various places along with 15 Gospel centres in Secunderabad and Hyderabad.

While the architecture of the old church building is that of Gothic style, the new building depicts modern architecture. The bell tower forms the facade of the church.

Other Churches in Secunderabad include


Explore more about Tourism in Secunderabad